We know we love our beers, but we believe that a major part of crafting something special is the enjoyment it brings others.

5 YEAR CELEBRATION | Strawberry Cotton Candy Shimmer Ale
We are celebrating our 5yr Anniversary with a limited Strawberry Cotton Candy Celebration Ale. In August 2017, Fenwick Farms Brewing Company was born in Rensselaer IN. Everything we do here at Fenwick’s is for the betterment of our beloved town. Here’s to the future! 5% ABV | 5 IBU

Rendezvous | Raspberry Wheat
Perfect end to a summer evening or the perfect pair date for your dessert Bright raspberry aroma reminiscent of a fruited lambic, but less strong and assertive. The American Wheat provides a smooth and refreshing base. Very raspberry-centric. ABV 5% IBU 18

Cover Crop | DIPA
This Double IPA covers your palate in strong hop aroma, strong hop flavor, and strong hoppy hoppiness. Delivered on a light base of sweetness from the additional malt. Everything about Cover Crop is more, more and more! 8.01% ABV | 95 IBU

American Lite Lager’s have been consistently popular in our brewpub. We couldn’t think of a better way to celebrate and give back to the community. Pale blonde in color, bright and refreshing, perfectly balanced at 10 IBUs thanks to Herkules hops rounding out the profile.
HIPSTER GRACKLE HAZY | NEIPA
Joining in on the Haze Craze is our Hipster Grackle Hazy NEIPA. Massive hop flavor without racking up the IBUs. Getting its opaqueness from high proteins in the grain bill, and bursting with tropical notes from the late addition Trident hops. Try it. It's what all the cool kids (21+) are doin' 5.8% ABV | 56 IBU

Rough Cut | IPA
This pale ale features a new, experimental hop grown in the gem state. We kept our grain bill clean and simple so that we could put focus on the aroma hop, Idaho 7. Strong citrus notes with just a hint of black tea. This IPA is a diamond in its natural state. 6.4% ABV | 56 IBU

Bravo 4 | American Pale Ale
This flagship recipe APA was brewed in tribute to co-owner Kenny VanHouten who served in two over-seas tours in the United States Army. If it’s pouring in the brewpub, he has it in hand. This American Pale Ale pours a sunburnt gold with a one finger white foam head. With every pint sold, a portion is donated to Fight Oar Die. Their mission is to increase awareness of, and support for, the cognitive, behavioral, and physical health of U.S. Military/ Veteran personnel. 5.9% ABV | 62 IBU
Bomber Blonde | Blonde Ale
This one is for our Bomber Nation! For the parents making the hustle to early morning practices, and the community support at every game. This rounded, golden American Classic was brewed for you. 5.6% ABV | 25 IBU
Fast Trax | Red Licorice Candy Ale
EMPLOYEE OF THE BEER | DAN Yeager
In recognition of Dan’s performance we have brewed a Red Licorice Candy Ale to honor his love of licorice whips and track super-star coaching abilities. Dan is, the proverbial man! 5% ABV | 17 IBU
Moultrie | Kettle Sour
FFBC's Moultrie Kettle Sour coined after our home county's namesake. At the battle of Fort Moultrie, when the Liberty flag of the fort was shot away, Jasper fastened the flag to a rod which was used to wipe out a cannon, and then raised it up again. In the spirit of bold steps and bravery we continue to challenge ourselves pursuing new brewing styles and experimental ingredients. 4.2% ABV | 6 IBU 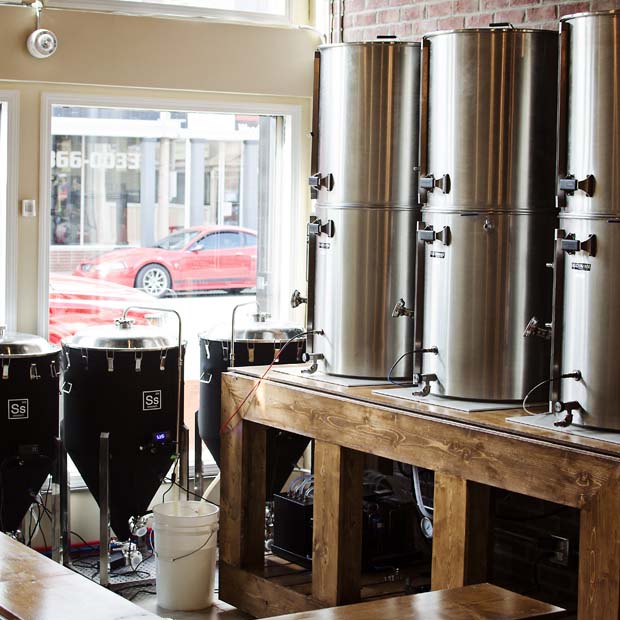